Organisational Design: Why does Hierarchy persist?

The world today is a very different place to what it was in the early days of capitalism. Today, we live in a globally interconnected VUCA world, where technology and automation promise that it will be very different again in an even shorter period of time. Even though so much has changed, and some variations to traditional hierarchy have been implemented with varying degrees of success, there are virtually no successful organisational designs that do not contain this essential element of hierarchy.

According to Elliott Jaques (In praise of Hierarchy, Harvard Business Review, Jan 1990), the reason for this is that “it is the only form of organisation that can enable a company to employ large numbers of people , and yet preserve unambiguous accountability for the work that they do”.

Given the human nature of organisations, hierarchy however frequently demonstrates its’ “dark side”. Anyone who has worked in a hierarchically layered organisation can attest to the difficulties that can be created: too many layers, inefficient decision-making, passing the buck, silo mentality, careerism, to name a few.

Typically when these social problems are created in organisations, our first instinct is to turn to a social intervention: team building, training, coaching etc. We do not always first ask the question: has the work been structured in such a way that it enables effective performance?

In the development of his model of SST, often referred to as Levels of Work, Elliott Jaques observed a universal and naturally occurring hierarchical pattern in the world of work, based on a difference between the complexity of work at different layers and the time span before the results of tasks could be seen. Effective hierarchy occurs when work at the next level is structured as focusing on the next level of complexity, AND when leaders at the next level have one level higher capability (ability to deal with greater complexity) than their direct subordinates. (see diagram below). This creates a perception of leadership, as the perspective and value add to the work of subordinates comes from a different frame of reference. 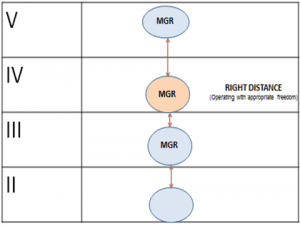 When the leader has the same capability as the subordinates, the potential is created for conflict and a lack of perceived leadership, as in the diagram below. 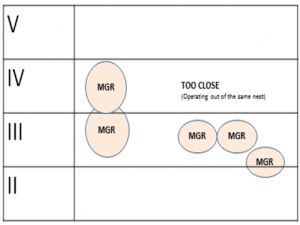 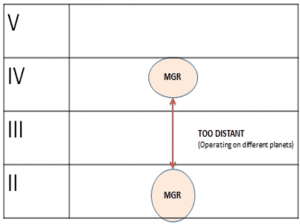 In a hierarchical organisation design, Elliott Jaques sees managerial work as having the following accountabilities:

The authority in place in order to have the above accountability is as follows:

In many organisations hierarchy fails due to accountability not being accompanied by the requisite level of authority. In addition, job grade is confused with hierarchy. Some extreme examples are those organisations that have more than ten layers and subsequently also define the same amount of leadership pipeline turns (Drotter et al). When one tries to decipher what changes between pipeline turns, the difference between the roles and the competency/capability level required is so minimal as to be unjustifiable.

In summary, hierarchy persists so that accountability can be maintained. In many organisations, though, the required authority in order to maintain the accountability is not present. Effective hierarchical design depends on ensuring that the complexity differences between levels are maintained such that leadership can fully assume the requisite accountability for driving performance.